The gold rush of 1851 resulted in many people flocking to Melbourne, for gold and work. The population of Australia grew four times in a period of 20 years from around half a million in 1850 to 1.8 million in 1870, with the majority of the growth within the Victoria Region – Melbourne.

Many of the people that migrated were from Europe and Asia. And not only did they bring their families but they also brought their ideas, cultures, clothes, religious thoughts and even their plants.

I decided to investigate this further, my visiting a number of parks, museums and gardens within Melbourne. I then craftily acquired leaf and plant specimens from across the city using the methodologies of my home boy – Robin Hood (stealing) and conducted research into the origins of the plans I collected. I was very surprised to find that many of the plants originated to Europe, Asia, South Africa, Mexico, USA and the Indonesian islands. I like the idea that these plants were in part an indirect consequence of the Gold Rush and movement of people to the City, and in some areas these imported plant varieties have become dominant over Australia’s indigenous plants, for better or for worse.

This work invites you to touch golden leaves of the plant specimens which I found. Plants that sit quietly in the parks of Melbourne. They do not need a Visa, or proof of their nationality, they are merely an unspoken visual, touchable, sniffable and in some cases edible immigrant, bringing biodiversity to the city, which many residents perhaps take for granted.

Each leaf has a different shape, texture, size and resistance – which I have then interfered with by spraying gold paint onto them – creating a sensual conflict between real and a false, reflecting how the Gold Rush has interfered with the natural and indigenous plants.

These immigrants are rarely spoken of. 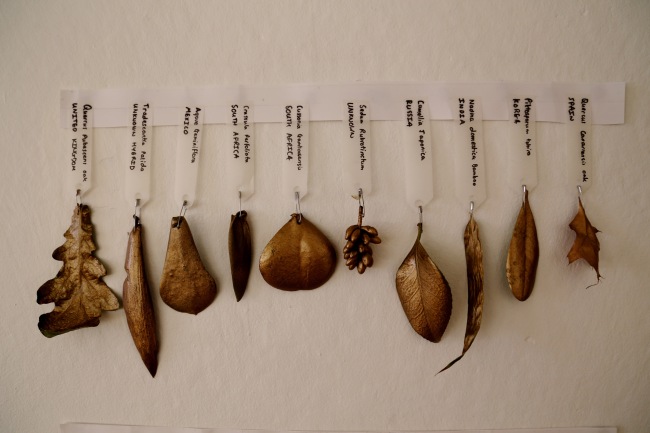