The Pink Elephant of Alcoholism, 1965 by Gavin Rogers. BERMUDA Collective 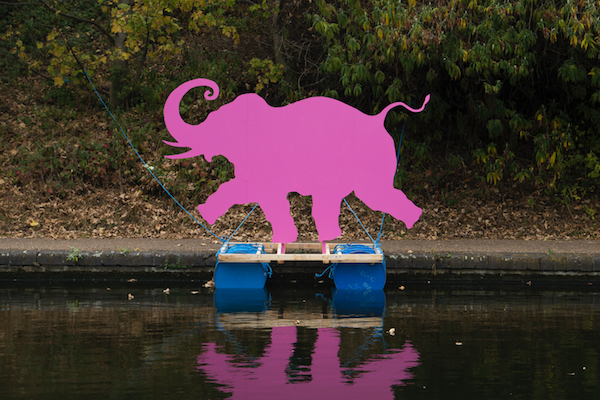 ‘Alcoholism 1965’ marks the launch of a ongoing project which transposes themes and graphic elements of 1960s and 70s Pelican books onto the landscape of contemporary post-utopian Birmingham. It takes inspiration from the identically titled book by Neil Kessel and Henry Walton, which discusses the epidemic of alcoholism in 1960s America and Britain, presenting descriptions, problems and solutions for drug related addictions.

The cover of this book – designed by Michael Morris – features a pink elephant. This project sees the visual of the pink elephant transformed into a giant raft, which will form the centrepiece of the exhibition: after having recently taken its maiden voyage on the Grand Union canal of Digbeth.

The ideas are explored further through various works including a book (Post-Utopia), which has been published with Rope Press, and a series of limited-edition prints & postcards, all of which will be available to purchase at the exhibition.

Bermuda is an artist collective made up of Bruno Grilo, Gavin Rogers, and Ally Standing.

Produced with support and input from Rope Press, Frederick Hubble, and Vik Chandla.