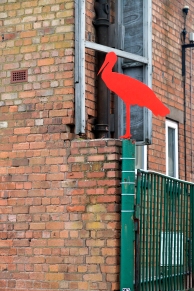 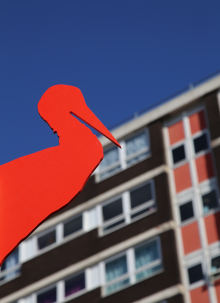 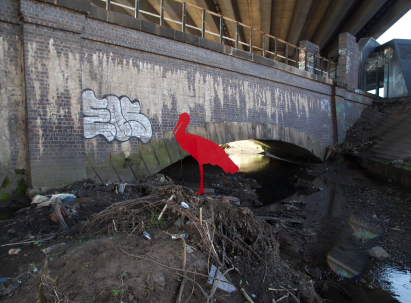 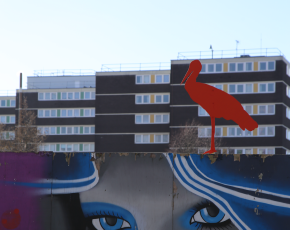 For thousands of years the common stork has migrated from the East African Savannah towards parts of Southern, Central and Eastern Europe. They migrate to almost every country in Europe, with the exception of the UK and Ireland. Many people, in particular those in Eastern Europe welcome these multi-continental migrants – being the symbolic bearer of good luck, life, health and vitality. Once nested, pairs of storks will return for the same nest each year, for the rest of their life.

In Eastern Europe there are many tales, fables, superstitions and rituals that surround the stork. In Bulgaria many of its citizens wear a red and white bracelet from the 1st March until they see the first stork of spring. Many of my Bulgarian friends living in the UK make a special trip back to Bulgaria each year, in order to see the stork so they can remove their bracelet to ensure heath and luck for the remaining year.

Between March and May 2018, Artist – Gavin Rogers installed a phalanx of 20 red migrant stork sculptures across the West Midlands, working closely with cultural venues, public spaces, schools and industrial workplaces – from working with a high rise block of flats in Heath Town Wolvehampton (Over 20 nations represented within) to working with Polish labours in glass factories, to running workshops and assemblies with children in schools and colleges across Birmingham to disseminate the story of the stork, welcoming outsiders and to run relevant and relatable workshops and events around migration.

In the following spring (2019), weeks before the formal departure of the UK form the European Union. The plan is to bring all of the storks together on a civic building to illustrate a weary phalanx of migrants looking across the region. Hopeful yet concerned, about whether they are welcome. An unusual yet delightful sight for passers by.

The stork re-appropriated as a silhouette in multiples, has the potential to provoke many debates and conversations about belonging, nostalgia and migration for both for home and/or migrant citizens – something particularly important in recent political landscapes.

As part of the project, Gavin undertook a self funded research trip to Gdansk, to visit the Centre of European Solidarity, the Museum of the Second World War and most critically research within the ‘stork’ village of Zywkowo in Eastern Poland. This has resulted in a video output with a series of photographic and texts based works. Works about Storks in breeding season, villages who look after the protected stork nests, the Russian-Polish border and more widely the importance of Gdansk politically in the context of WW2, The Iron Curtain, the EU and Polish cultures. Works that aim to question, critique and reimagine agendas attached to migration, socialism and perhaps even fascism.

The project so far has had impact in the context of outreach events. Over 200 school pupils across the West Midlands have has workshops, assemblies and events surrounding the project and the ‘story of the stork’ in the context of migration, social cohesion and making people ‘feel welcome’. The sculptures have been spotted by members of the public and are finding their way onto social media platforms. Conversations have emerged with Stryx Birmingham (independent art space) and polish curators Karolina Korupczynska and Anna Katarzyna Domejko.